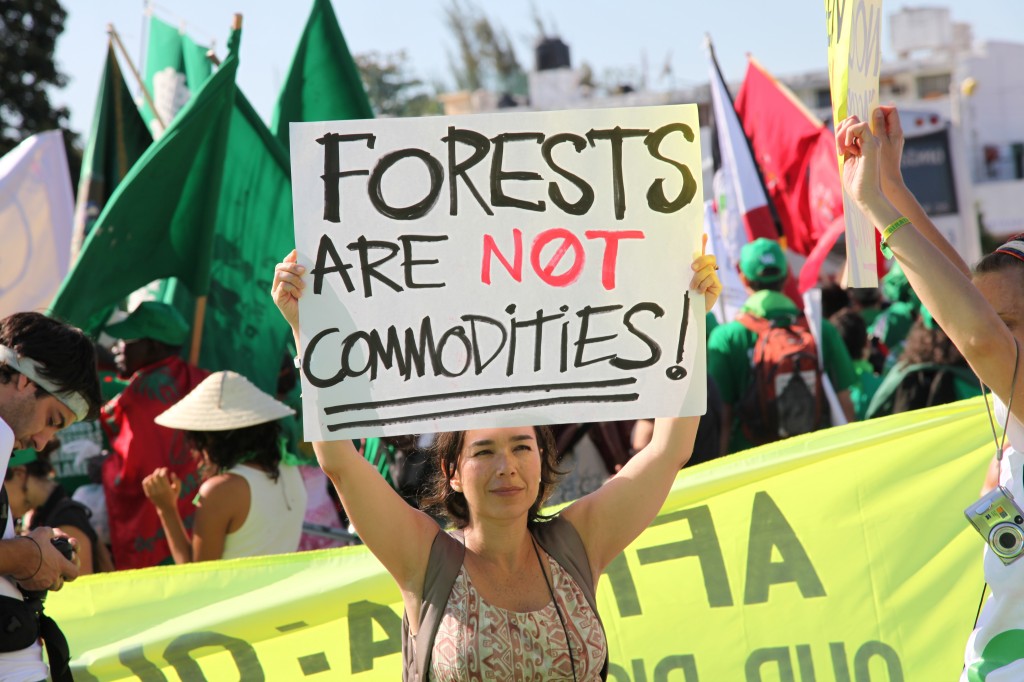 At this event, activists, researchers, and NGOs and will be sharing testimony from communities across several continents, discussing these new threats to people and nature, and begin learning how to challenge them together. END_OF_DOCUMENT_TOKEN_TO_BE_REPLACED 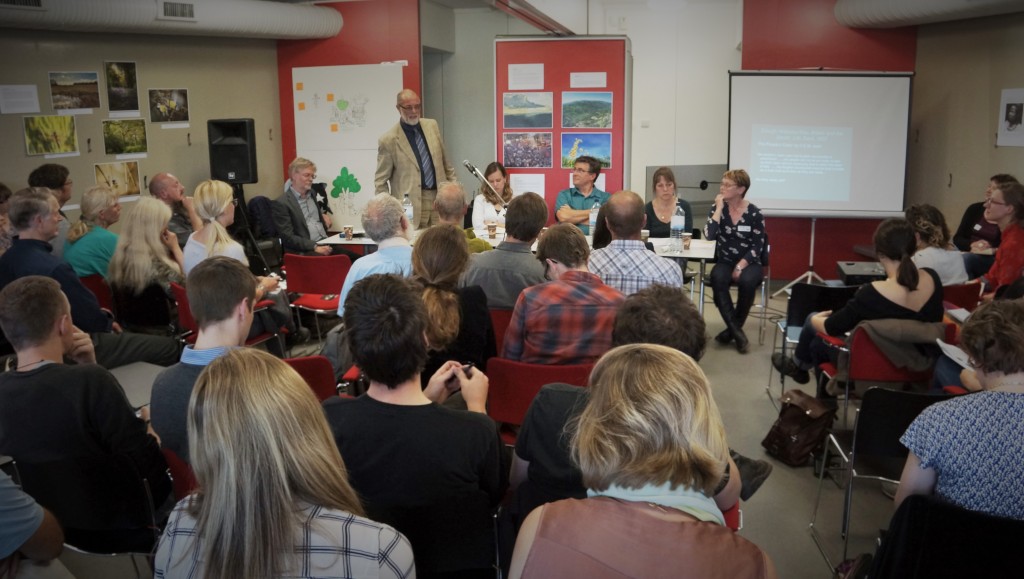 A brilliant array of speakers joined the 2nd Forum on Natural Commons in London last week:

You can read what they had to say and records from the evening on the Fern website here.  Photos of the event are also available at this link.

A big thank you to everyone who participated and made it such an engaging evening.

The UK government appears hell-bent on pushing through biodiversity offsetting – which will allow wildlife and habitats to be destroyed across the country, so long as it is ‘replaced’ elsewhere.

The policy is inherently flawed: biodiversity offsetting ignores the difficulties in recreating ecosystems, it overlooks the uniqueness of different habitats, and it disregards the importance of nature for local communities. Once a harmful development project goes ahead, communities lose access to it forever.

We believe it’s time to make space for nature and communities. At the 2nd Forum on Natural Commons, we bring together NGOs, academics, activists and the general public to discuss nature as a common good that benefits us all. Join us!

This June, the UK Government is teaming up with an international collaboration of companies, financial institutions, government agencies and civil society organisations called the the Business and Biodiversity Offset Programme (BBOP), and the Zoological Society of London (ZSL London Zoo) to host the ‘first global conference’ on biodiversity offsetting, “To No Net Loss of Biodiversity and Beyond”.

The London-based summit involves more than 300 people from mining, finance, corporate, NGO, international agency and research sectors. It signals a real intensification of global policy efforts, championed by the UK government, to roll out biodiversity offsetting around the world.

We are concerned that the knowledge created and shared at this Summit will serve to reinforce what we believe is a dangerous and harmful policy, as it is currently being envisioned.

What are we doing about it?

We believe it’s time to make space for nature and communities. At the 2nd Forum on Natural Commons, happening in Regent’s Park, opposite the official summit, we bring together NGOs, academics, activists, journalists and the general public to challenge biodiversity offsetting as a flawed policy and will discuss how to protect nature as a common good that benefits us all. Join us!

Panel 1: New directions in conservation: a closer look at ‘value’ and offsetting.

A new conservation paradigm is emerging among policy makers; that in order to properly protect nature, it must be given a ‘proper value’. This usually means setting up ways to measure ecosystems and biodiversity in terms of pounds, dollars and euros so that nature, industry and economic growth can all appear on the same balance sheet.

This potent narrative underwrites much of the political energy that is currently directed at developing systems of ‘biodiversity offsetting’ around the world. Central to the concept is the idea that the ‘value’ of any particular item of biodiversity can be assessed against others and units of biodiversity value can be added up, divided and shifted around like figures in a spreadsheet. This is at the heart of the thinking behind ‘no net loss’ initiatives. It is an appealing (but fundamentally flawed) idea because it divorces the ‘value’ of biodiversity from the complex ecological, social and geographic relations that allow that biodiversity to exist.

Where did this new narrative for ‘value’ come from and how is it being engineered? Why is it treated as self-evident by policy makers and what does it conceal? This panel explores the new directions in global conservation policy, the difficult question of ‘value’ and its emergent role in environmental governance.

Access to nature is important for people’s well-being, health, prosperity and happiness. Whether shale gas, a new road or a large housing development, new development projects have an undoubtable environmental and social impact.

Biodiversity offsetting propagates the myth that people and nature are completely separate, by promising to neutralize the environmental impact of development by protecting or improving biodiversity elsewhere. This may lead to an increase in developments that infringe on community rights and access to nature. Land set aside for conservation within an offsetting scheme could lead to further land grabbing, taking land out of the hands of communities in order to serve corporate ‘environmental’ interests.

Nature is not something we can have elsewhere: it is not separate from people – this is the myth that offsetting propagates. We need to learn to live sustainably, meaning we need to challenge unneeded development, and make sure that development that does happen is as sustainable as possible.

What are the impacts of biodiversity offsetting likely to be on the ground, and what will it mean for communities struggling against development proposals? Owen Paterson MP said that offsets should be an hour’s drive away – but how far is too far? And is this really the point? This panel explores the implications of biodiversity offsetting on people, and how community rights are articulated in the global North and South.

There will be a small cocktail after the event until 20h30

A photo exhibition from 13 different photographers can be visited in between and after the panel discussions. It aims to explore how natural areas cannot be offset and showcases just a few examples of brave community resistance from Romania, Brazil, Ecuador, France and the UK.

Last year at the Forum on Natural Commons there was a call from people in Scotland to resist the financialisation of nature.

Now the Scottish Parliament is listening at this event:

Patrick Harvie MSP and Jamie Hepburn MSP are jointly hosting the event which they hope will be an open and frank discussion on the topic of natural capital involving a wide range of interested parties including MSPs, the business community and NGOs.

Jonathan Hughes (Scottish Wildlife Trust and IUCN Councillor) and Nick Dearden (World Development Movement) will be debating some of the key issues, followed by questions and discussion from the floor.

This event is free but registration is strictly mandatory. You can register by clicking here. You are advised to arrive 30 minutes early to give time to register and complete any security checks required.

As delegates arrive in Edinburgh the great nature sale has already begun online with Ben Nevis going for a song on ebay.  Have you put your bid in yet?

Supporters, speakers and organisers for tomorrow’s Forum on Natural Commons are also arriving coming from 14 organisations from across the Europe.  We’ve also heard that we’re being joined by Brazilian activist Camila Moreno by video link from the UN climate change talks in Warsaw.

If you haven’t yet booked you’ve only a few hours to do so and spaces are limited.  We hope you’ll us.

Our week of action and events is kicking off this evening with the Introductory Workshop at the University of Edinburgh.  Spaces are still available and you can find out more on the workshop page.

We’re also nearly ready to unveil our new photo exhibition which will be open to view over dinner at the Forum.

The conversation is getting started online and offline.  Join in on Twitter at #notforsale.

Distinguished speakers from across Europe will be joining the Forum on Natural Commons including philosopher John O’Neill, University of Manchester (pictured, left).

Speakers Dr. Mike Hannis, Open University and Bec Sanderson, Common Cause (pictured, right) will contribute their viewpoints on the value of nature and Tamra Gilbertson from Carbon Trade Watch in Barcelona (pictured, centre) will be sharing her experiences of monitoring the carbon trading in the European Union.

We’ll discuss their contributions and those of our other speakers over dinner for an sociable and enlightening evening.

Places are free but limited for the Forum so we strongly encourage you to register as soon as you know you’re coming.  We very much hope you’ll consider it.

Our first speakers are confirmed for the Forum on Natural Commons, 21 November in Edinburgh, Scotland.

Brazilian activist Camila Moreno will be joining us directly after representing Friends of the Earth Brazil at the UN Climate talks.  We’ll also hear from global finance campaigner Nick Dearden on the links between the financial and ecological crisis and Antonio Tricarico from Re:Common in Italy.

We’ll be announcing many more speakers in the coming weeks, in the mean time register now to confirm your place for an wonderful evening of food and ideas.